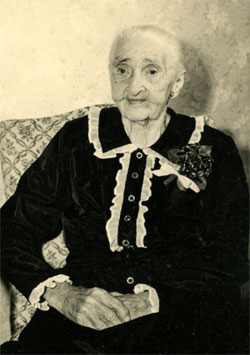 Gesche Hinrichs Schloemer Kettwich is not a name that most people in Minonk will remember since she died in 1952. In addition, she was not a civic leader or a prominent name in social circles. However, her life was long and interesting and reflects the lifestyle of the early settlers in this area. She had eleven children, most of whom settled in Minonk, and had 122 living descendants at the time of her death.

As a little boy, I remember my Great Grandma Kettwich as a little soft-spoken woman who spoke mostly German. My mother would translate our conversations with her. I also remember her as the typical widow lady of that time. She always wore long dresses that hung to the floor and more often than not the dresses had long sleeves and were black. In addition, she wore the old granny shoes which were laced black pointed shoes with a heavy heel.

Grandma Kettwich was born in Germany in 1850 and married Uffe Gerdes Kettwich in that country on January 28, 1871. They immigrated to America by steamship later that year and went directly from New York to Sacramento, California by train. From Sacramento they took a stagecoach to Norfolk, California where they bought a five room furnished house for $103 and sold it for $50 when they left.

Her husband Uffe spent two and one-half years digging for gold. The men dug along the river bank, emptied a spade of mud into a box with a screened bottom. Water was flushed through the box, washing away the mud and the dirt,leaving a deposit of gold nuggets. Some pieces of gold were as large as peas, but most were smaller.
Besides the regular house work, Grandma Kettwich had a garden where she raised beans, peas, potatoes, cabbage, etc. Peach trees and grapevines were grown, and a small patch of wheat was raised to feed the chickens.

In California the summer days were hot and the nights cool. They experienced a few small earthquakes.

Their first born child Gerhardt was born in California but died at a young age when he was bitten by a snake as he sat next to the garden watching his mother tend the garden. Some relatives say they remember Grandma wearing the rattlers on her dress from the snake that she killed . Later they had another child, Lena, who was six weeks old when Uffe and Gesche came to Minonk.
They lived in Minonk two and one-half years. During this time Uffe worked in the coal mine store, furniture store, and the brick yard. In 1875 they moved to a farm east of Minonk where they raised their eleven children.

They retired in 1916 and moved to Flanagan. Mr. Kettwich died in 1923. After his death Grandma Kettwich spent the rest of her life living with her various children. This was before nursing homes were popular and families would take care of their own elderly. Grandma Kettwich would stay for 3 or 4 months with one of her children and then go stay with another. This went on for almost 30 years. To my knowledge she was never in a hospital.

Grandma Kettwich’s longevity was passed on to her children. The ages at which they died were Lena Bauman 87, George 73, Henry 77, Lucy Osterman 96, John 92, Carl 85, Eilert 93, Uffe 94, Sena Rients 97, Anna Post 87. A daughter Christina Wyman died at 36 during the 1918 flu epidemic. Grandma Kettwich was remembered as a small active woman with warm brown eyes, cheerful, considerate of others and a devout Christian woman. Her daily prayers meant much to her.

I remember going to my Grandma Bauman’s house after Great Grandma Kettwich’s funeral in 1952. The house was teeming with her many relatives. The mood was joyous rather than sad. Everyone knew that this would be the last time there would be such a large gathering of the family. Also, everyone knew that we were celebrating a long life full of many great experiences.

My mother once told me that Great Grandma Kettwich had heart trouble when she was in her forties. But she still lived to be almost 102. It is obvious to me that the best cure for heart trouble is to be surrounded with the love of a large and caring family. 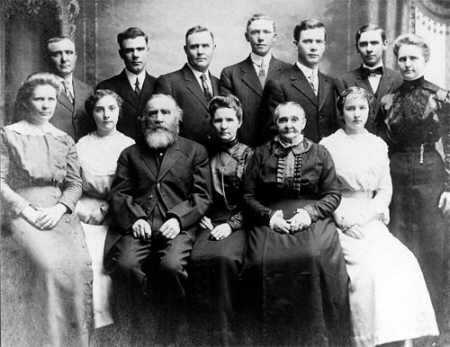