The name Kettwig and Kettwich is rather rare in the German speaking countries. In Austria there are only two known families (my parents and I). In Germany there are more instances found, according to the telephone directory of the year 2002 (will not be updated due to a decreasing number of fixed line phones) about 123 entries in 37 distinct counties. Projected to the total population in Germany there might be approximately 328 people with that name. The following maps were created with the help of Geogen . More details, such as a map with names of all counties and regions, can be found there as well. 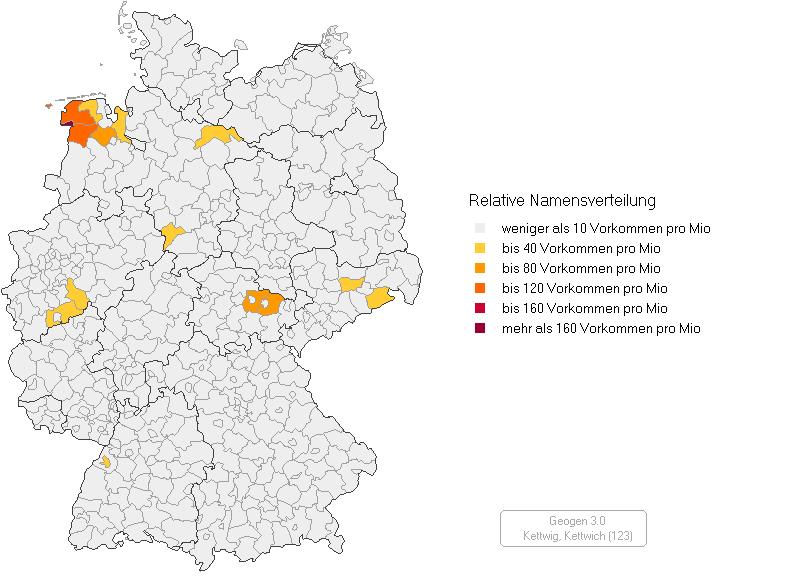 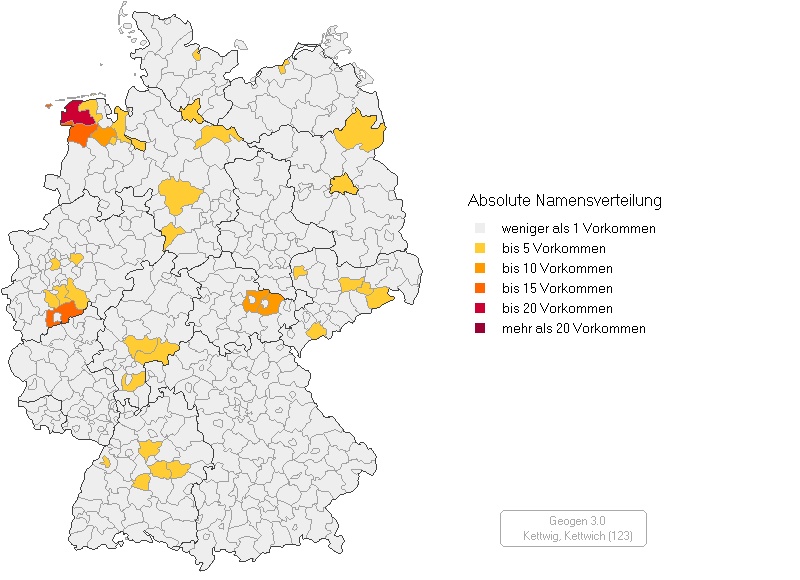 The origin of the Kettwig surname can only be guessed and there are many contrary interpretations of its meaning and development. Kettwig families, who live today, have various origins, places, countries and ancestors.

The name may be connected to of two towns: the former town Kettwig, now part of Essen in Germany, or the town Katwijk in the Netherlands. Whether one these towns can be connected to the Kettwig surname remains to be proved.

Mainly two spelling variants can be found: Kettwig and Kettwich. They are most certainly one and the same name, with only a different spelling.

The oldest version of the name is Katuuik. An interpretation sees “kat” as a river bend, “wick” as a settlement or village. In other words “a settlement at a bend of the river Ruhr”. The name was first mentioned in a document in 1052. The settlement, however, had existed prior to this date because the ford in the river Ruhr made a crossing possible for travellers on the “Bergische Hellweg”, a historical route. Below you find the different spellings of the town of Kettwig in history. In brackets you find the year this spelling was documented.

According to a document of the year 1697, the “Katten” were a people which travelled down the river Rhine, starting in their place of origin (propably Hesse) and settling at the estuary of the river. Therefore “kat” stands for the people of the “Katten” and “wijk” (short for “wijkplaats”) for “place of refuge”. The name Katwijk would then mean “place of refuge of the Katten”.